Thursday, July 15, 1976, was pretty much another summer day as pretty much every summer day goes in the Central Valley of California. But by the afternoon, the day turned into the DARKEST day ever for the communities of Dairyland and Chowchilla. Across America, there were ongoing month-long celebrations marking the 200th anniversary of its founding on July 4, 1776. But as night fell on July 15 the celebrations stopped. There was but one news item and one headline that captured the attention of the nation on their televisions, and their radios, and in their newspapers.

A local Chowchilla school bus with 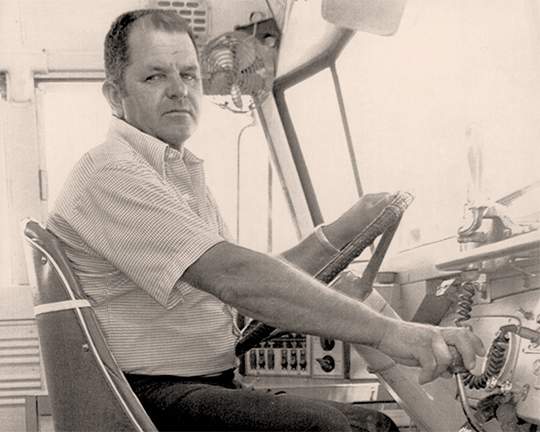 26 children ages 5 to 14 years along with the bus driver had disappeared.

Nearly 30 hours later, on July 17, Dairyland and Chowchilla rejoiced when the 26 children and their bus driver walked up to a night watchman at a rock quarry in Livermore, California, 100 miles away, all safe and secure.

That bus driver, Mr. Edward Ray, became a HERO, not just in our local communities of Dairyland and Chowchilla, but across the nation. But, contrary to his nature, he did not act the hero and was embarrassed by the attention thrust upon him. Edward Ray, or just Edward, as the kids knew him, was a private, simple hard-working man. He got caught up in a bad situation that July summer day and did his best to take care of the kids in his charge. That’s just what he did, but he was still a HERO. Edward Ray passed away on Thursday, May 17, 2012, in Chowchilla. He was 91.

Click HERE to read more about the 1976 bus kidnapping.

At the January 27, 2015, Chowchilla City Council meeting elected officials voted to rename the popular Sports & Leisure Park in honor of Edward Ray. The park is home to many youth sports leagues and activities, along with family picnics, and is a perfect match for Ed Ray’s legacy.

The official dedication took place on Thursday, February 26 at 4:00 p.m. at the park on 15th Street at Sonoma Avenue. An outpouring of the community joined officials and members of the Ray family to attend the unveiling of a sign denoting the park as the Edward Ray Park.

Robert Goulet was one of the most popular and successful singers in the 60’s, 70’s and 80’s. He started in musical theater and had his breakout role of Sir Lancelot in the Broadway production of Camelot opposite Richard Burton and Julie Andrews. His unique resonant and stirring baritone voice achieved instant recognition with his performance and interpretation of the song "If Ever I Would Leave You", which became his signature song. His debut in Camelot marked the beginning of a stage, screen, and recording career during which he won a Grammy, a Tony and an Emmy Award.

One of his many albums was titled Timeless. Though it had a very limited release it included Mr. Goulet’s recording of the Ballad of Chowchilla Ray. Nearly impossible to find today the following link is to the song hosted on SoundCloud.